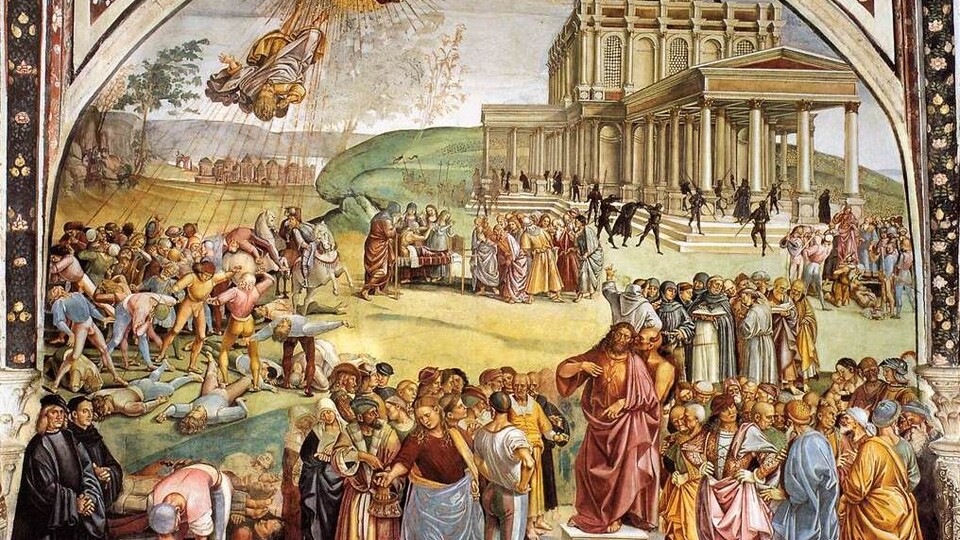 I am looking at a Renaissance fresco on my phone. It is The Preaching of The Antichrist by Luca Signorelli (1500-1504), where a sinister devil is whispering commands to an uncanny Christ-like figure, who is delivering a sermon to a decadent crowd. The original work is in the Chapel of San Brizio in Orvieto and measures 539.3 × 472.4 inches. But I do not mind looking at it on a 6-inch screen.

I am really into art like that. It is my favourite thing ever. Nothing compares to the thrill of looking at a nano version of a thing. To avoid engaging with its discipline completely in favour of conversing about popular issues that will advance my career. Ahh, I love feeling important. Hence why I am an advocado: a portmanteau of “avocado” and “advocate”. This term describes my propensity to dominate Boards, panels and information sessions with woke capitalism. But with a Coles twist. It took me a while to find an alternative to “politician”, but I am satisfied with advocado. It is more self-important than admitting I am a Google docs scribe.

Yeah, it is hard to find one word that conveys what I do because my output is talking for personal gain (disguised as social causes). It makes me sound like a schemer but that is impossible because I am avant-garde. My lips look dehydrated from prosecco, my Oxford Docs are on point and my judgmental views alarm my psychologist. Talk, talk, talk. That is what I do best. Mostly about how great I am but sometimes about art too. My bio should say that I go around pointing fingers without looking at my own behavior. Instead, it reads “I believe in a better future”. I love it because it makes everyone walk on eggshells. However, today I am looking at the fresco The Preaching of The Antichrist because I am questioning things. One could say that I am having an existential crisis.

It all started when people began sending me emails addressing me as a “cultural leader”. I thought it was a mistake at first, supposing they had confused me with a real cultural leader deserving of the title, respect and spotlight. But then I received an introduction package called Cultural Leadership and You with an agreement that forbids me from touching on a wide range of topics. This is a flex, not a complaint, because I am very excited someone is calling me a “leader”. Even though my ideas are a rip off and my provocations sound like State Art. But hey, my first name is Diversity, last name Impression Management, and friends call me Care—remember to wear a jumper and stay Culturally Safe.

I got so high on embodying the liberal values of multiculturalism that I screamed from the top of my lungs “I am king of the world!” Well, that was DiCaprio in Titanic but same shit. The point is that I am a mover and shaker now. One of those edgy advocates in the arts that meet in the evenings to talk about symbolic gestures of transformation, right before doing ketamine and putting together a wacky jigsaw puzzle. If I wasn’t straight edge, I would be invited to even more important meetings. Shrugs. My leadership consists of regurgitating whatever is going on in the USA and the UK. Since social transformation is linguistic but table games are for realsies, I am unconcerned with locality.

Oops, the first item in my contract’s schedule prohibits me from poking fun at recreational activities that weaken the assumption that we are very good people—so I already breached that one. The second item emphasises that I cannot—under any circumstances—say something funny about arts workers because they go Karen and Ken real fast. The third item makes it clear that pointing out curators create questionable “art” would result in an immediate termination of my engagement, especially if I refer to their “art” in inverted commas. The fourth item says I better shut the fuck up and speak only when spoken to, which is a rude shift in tone, but I appreciate the directness.

There is also a mean clause on power that explains how I earned my position only because I am Culturally and Linguistically Diverse. My currency relies on the strategic distance between origin and perceived contextual dislocation, which adds value to the moral trade of progressive optics. That one is a bit wordy, so I had to read it twice. That’s when I noticed another clause that reads: “eat shit loser, we own you now.” I am a bit surprised by the lack of entry requirements otherwise, considering I do not even need to take workshops on the regular. Either way, I am looking forward to delivering tons of justice on the internet.

Only problem is that I started to get impostor syndrome. You know, that thing where you double guess your superiority—I mean, transcendence. Only talented people get impostor syndrome, I know. But I was not sure if I was fucking amazing or just good. Like, what if people only mildly admire me? I felt so confused. I wanted to die. But in a spectacular way. Let me save a killer whale, get crowned as Triton by Poseidon and marry a manatee. Then die a natural death kinda way. Ugh, this is my low self-esteem talking: Triton is immortal, like the intelligentsia goddamit.

I followed an Instagram page for empaths to find solace, my real problem is that I care too much. No one on this planet cares as much as I do. Everyone is toxic but me. You are the problem. That is my motto. It is all about me but my fingers are pointing at all of you. Fucking fascists.

I got it together just in time for my first meeting with a contemporary art organisation called The Fellowship of the Ring. It was real fun but confusing. They call themselves “event makers” and talk about all things except art. The Fellowship is made of committee members with expanded practices, capes and winklepicker shoes that make everyone look heaps magical—no artists in sight. It was a bit embarrassing for me because I am an artist and everyone else is more corporate libertine. But I can hide my passion for culture very well. Most of the agenda was about how long it takes to shepherd artists like a flock. Gandalf—the Chair of the meeting—kept going on and on about a ring that rules them all but I zoned out. Wizard of Middle Earth or entitled white dude, am I right?

Turns out we are on a hero journey. We came up with radical ideas to change the art world, such as “let others work and take the credit”, “play to people’s fantasies” and “let your victims feel smarter”. Well, to be honest they are chapters in The 48 Laws of Power but we are going to paraphrase them later. We care so much that it hurts.

This person was different, like a real advocate or something. I remember we wrote down their ideas to copy them later because they were so tight. They offered sincere guidelines to improve the industry by increasing access to a range of creative voices with succinct actions. They considered how each one of us may conduct ourselves professionally in ways that improve culture, labour and our carbon footprint every single day.

There was neither judgement—nor punishment—in their provocations, only a vision for a more functional art world. They treated everyone with genuine empathy and kindness, without an ulterior motive. It was always about art, never about them. They made a portrait of us; we drew portraits of ourselves. I asked them to be my friend, but they told me art people like me are too self-absorbed. Ouch.

Hence why I am zooming in on the face of the devil in The Preaching of The Antichrist. In this fresco, Satan’s bald head reveals some sharp and bony features, supported by a slim frame that contradicts the anatomical ideals of the Renaissance. His wings are delicate like those of a rare bird and his horns are stylised to create a pleasant but menacing figure. The devil resembles a model on the cover of a glossy magazine because he is dangerously beautiful. His arm is tucked under the Anti-Christ’s garment to suggest a conjoined state, a relationship of oneness. Both share a reddish skin tone that clarifies they are one being rather than host and parasite.

The Anti-Christ is a wicked replica of Jesus painted to desecrate the nobleness of the latter. While Christ is often depicted with kind, profound and soft features, the Anti-Christ here appears cruel, vain and wrinkled. It captures the essence of a corrupt and verbose politician, someone who rose to prominence with a false promise. One could say that he is a virtue signaller like most ‘About’ sections on art websites.

Whatever, I have a meeting with The Chronicles of Narnia next week. They are an art organisation based in a wardrobe that works with artists from diverse backgrounds. They are cool but the Lion is unbearable. Roar, roar, roar. Like, we get it—you are a talking lion that merged with Satan. Get over it! Someone even leaked a message from our national peak body that says the Lion is “more concerned with politics than people”. I am not a qualified exorcist, but I have a brown scapular. You can bet I am wearing it to that meeting like a good advocado.

Cover image: Luca Signorelli, The Preaching of the Antichrist, 1499–1504. Courtesy of Wikipedia.